It’s not exactly hard to find a race to take part in these days. A host of new ones pop up every year across the UK, and not small ones either. Big races with enormous marketing campaigns and event villages catering for thousands of people suddenly come into existence as if they’ve always been there. People sign up in droves long in advance, desperate to take part in new ones to see how they compare.

The Vitality Run series is one of the most prominent of these. Now with eight large-scale events across the UK, each is fast becoming a standard in the racing calendar. Their latest, the North London Half, follows the success of the Hackney Half launched last year which saw thousands making their way through East London streets.

Taking two of North London’s most famous sporting Landmarks; Allianz Park (home of the Saracens) and Wembley stadium, the course sees runners go from one to the other and back again. The inaugural event had Mo Farah to  help both promote it as well as appear at the event itself to set the horn off at the start line. Not a bad race ambassador to have.

But, marketing and promotion aside, was the race actually any good?

Well, in a nutshell, yes. There’s always a risk with these large-scale events that some of the personality or charm will be lost as it works its way through the corporate machine. However at the same time it also means that, by being pulled together by a company with experience, plans, strategies and revenue targets, that the whole event should be meticulously orchestrated. 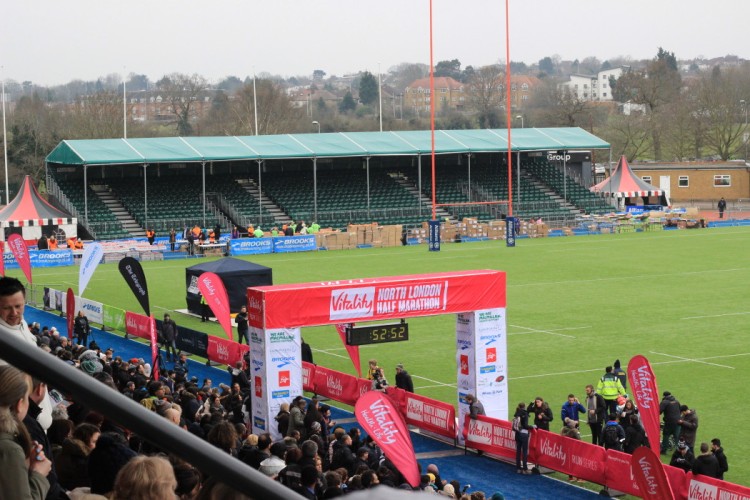 The event village, located at Allianz park, wasn’t the easiest place to get to by public transport, with the closest station being a twenty-minute walk away. However there were frequent free shuttle buses taking people to the stadium. Once there the event village was well organised with sufficiently manned baggage drops and information stations, however as is always the case with an event of this size the toilets were subject to some pretty big queues.

After reaching the start line, a few hundred meters from the village, runners were greeted with the happily smiling sight of Mo Farah stood waiting to set everybody off. Something which justifiably caused excitement and cheers from across the crowds. After the horn sounded people ran past taking pictures and shouting as Mo waved them on. 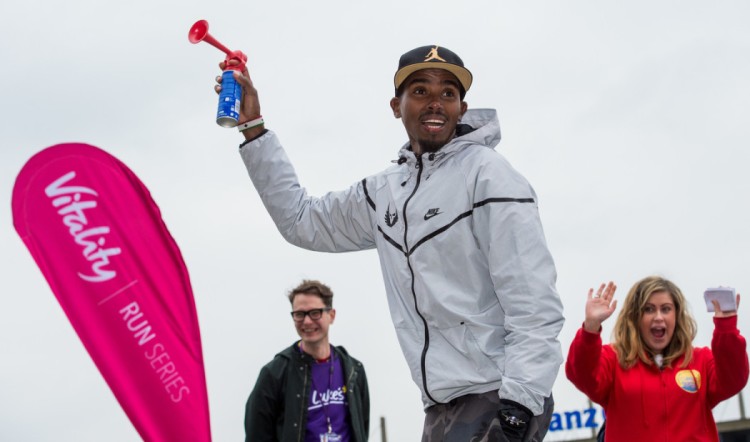 The race itself was well set out with traffic diverted away from the main course. The scenery was as can be expected from thirteen miles of zone 3 and 4 London with a mixed bag of suburban, industrial and retail streets before hitting Wembley stadium halfway through. This was by far the high point of the course meaning runners had the chance to enter the stadium and run across the track, a live video screen showing high above as they did. From there the course went back on itself as it returned to Allianz Park. 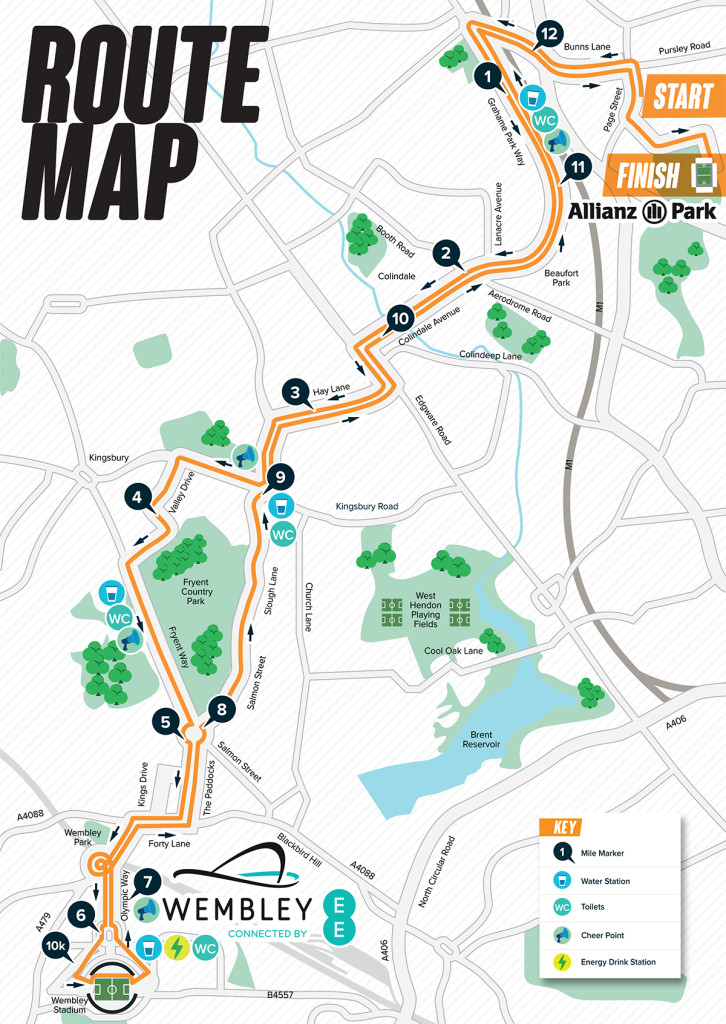 With the rain holding off and the wind only causing mild concern, the major challenge across the field was the elevation. Not the kind of elevation you might find on a trail run mind, but still enough to cause some distress to the average road runner as the course undulated for the majority of the distance.

The race ended back in Allianz stadium with finishers receiving a medal, T-shirt and a well stocked goody bag (A Mars bar, Pop Chips, Yoghurt Raisins, Naked bar, Lucozade and a banana – we like a goody bag). The medal being one of the nicest designed ones we’ve seen in a while. 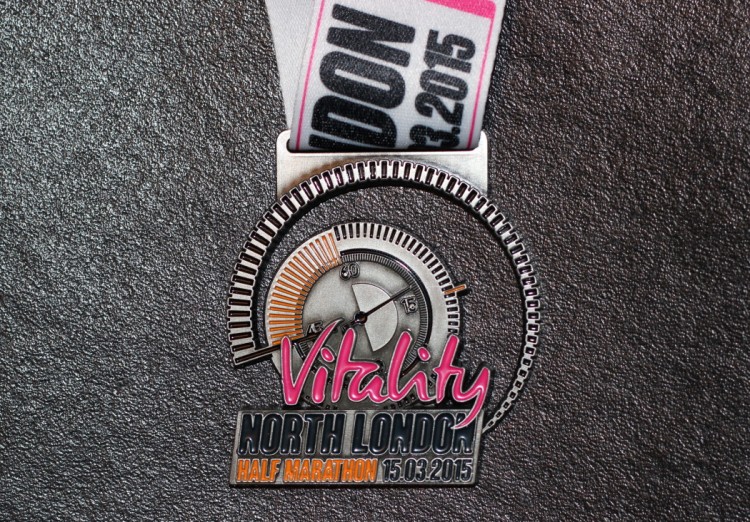 After the race a press Q and A was held with Mo where he spoke on a variety of subject from his disappointment in The London Marathon, his Foundation charity, what he eats for breakfast and how he staves of boredom when running long distance. Quorn was also mentioned. 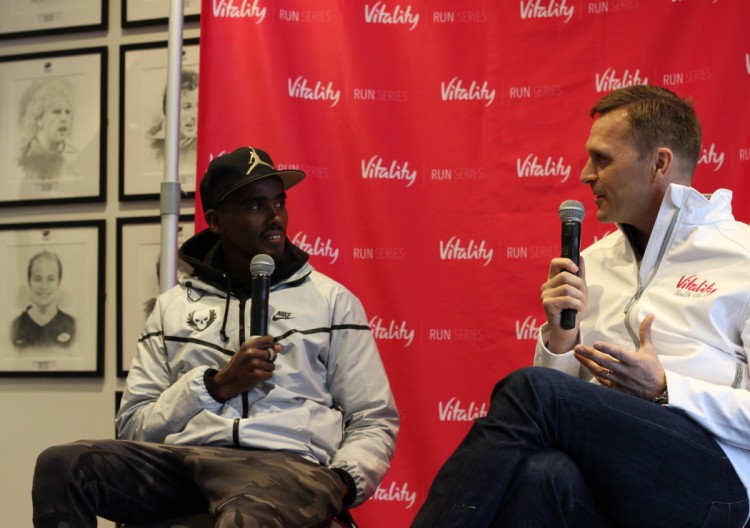 Overall this first outing for the North London Half Marathon was impressive. An enjoyable course for both newcomers and seasoned runners that can be used as a standalone race or part of a Marathon training plan. The event village was well organised with excellent marshalling and emergency support. The really success for the event however was the inclusion of Mo Farah as ambassador which is a testament of just how prominent the race series has become across the UK.

Pre-registration is now open for the 2016 race at http://www.northlondonhalf.com.

Mo Farah spoke as the official ambassador for the Vitality North London Half Marathon, the ’Stadium to Stadium Half’. The event is the latest instalment in the Vitality Run Series.