We’ve been to a lot of festivals in our time. Big festivals where crowds of people wander around music stages trying to find their favourite bands. Festivals where people stay up all night drinking alcohol until the sun comes up and they can barely speak with tiredness. They’re the kind of festivals we’re used to. The ones where you come home afterwards, ears ringing from relentlessly loud-speaker systems and a body so weak it passes out as soon as it hits the sofa.

The Nightray Outdoor fest isn’t one of those festivals. Yes, it takes place outdoors. Yes, you sleep in a tent and yes, you probably end up drinking alcohol. But instead of music, Nightray is about of discovery and adventure. A weekend devoted to celebrating those pursuits that take place in nature. The kind of things you might put under the umbrella term of exploration. You know, like trail running, hiking, climbing and yoga. It’s our kind of festival.

If you haven’t already heard of the Gorges Du Verdon, it’s a river canyon in south-eastern France which is widely viewed as one of the most beautiful in Europe. We’d never actually been there before, but trust us, it’s pretty damn nice. With its turquoise waters, vibrant greenery and picturesque rock formations, it’s no surprise that The North Face decided launch the festival there.

Starting at 5pm on the Saturday, the weekend covered a range of outdoor themed activities. With trail running sessions taking people up into the hills, planned climbing, hiking and a dawn yoga session, the event had more than enough to sate the appetites of those athletic types that turned up.

We turned up a bit early, largely due to the fact we took a flight to Nice at about the same time we normally get home from a night out. So, since things weren’t due to kick off for a few hours, we jumped in a Kayak and set off for a relaxing jaunt down the Verdon.

We’d heard some rumours that the various athletes that were presenting at Nightray were probably out and about the area getting up to the kind of stuff you’d expect them to be doing. So it was no surprise that we turned into a bay and found rock climbers James Pearson and Caroline Ciavaldini making their way up the underside of a large wall. Well, it was no surprise to see them, but standing below them as they clambered twenty metres above, in the same kind of relaxed, care-free fashion we walk to the shops with, was more than a bit exciting.

But the event was a lot more than just a chance to do some exercise out in the open. The North Face, as you’re probably aware, is a brand with a fairly hefty selection of some of the world’s leading endurance athletes. Endurance athletes that have some pretty amazing stories to tell. Over the course of the evening many took to the stage to talk to the crowd about their own experiences of exploration. Experiences that had everyone intently listening.

Rock climber Yuji Hirayama (incidentally our new hero and a ridiculously nice guy) did a talk on his visit to Japan after the 2011 tsunami; where he aimed to set a series of new climbing routes in the area in a bid to attract tourism. Simone Moro, world-famous Alpinist and expedition climber, told the story of how the loss of his climbing partners in an avalanche led him to not only learn to fly a helicopter, but also become the first pilot from the European Community to be qualified and allowed to fly and work in Nepal.

There were many more presentations and stories from athletes and experts as the evening went on, with the crowd breaking up into smaller groups dotted around the site. This was where the event really came into its own. Small huddles of people in deep conversation with their heroes, only the light from their head torches illuminating the area around them. 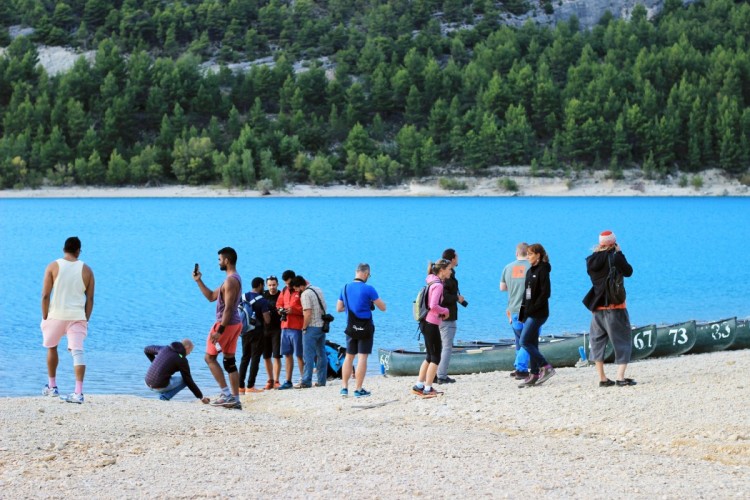 Ultra runners chatted amongst themselves about the best time to drink water during a race, outdoor photographers compared techniques for taking the best pictures and there was a live presentation of expedition cookery led by Kieran Creevy from Sidetracked, one where he generously passed round samples of the resultant meals. All happening in a location which meant you were part of it. It wasn’t a festival to make money or to push a product, it was just a bunch of people talking about things they cared about.

To read more about the event head on over to the website here. There are no details yet on what we can expect for Nightray in 2016, but if the inaugural event was anything to go by, it’s one worth keeping an eye on.