When I was asked to take part in Tough Mudder as part of the Sony Xperia #ICan campaign I was hesitant. Extremely hesitant. I’d taken part in the event two years before and told myself I’d never do it again.

Why? Because it’s horrible. Because you have to do things that have been devised for the sole purpose of scaring the hell out of people. Heights, cold water, small holes, electric shocks. It’s not a trip to Alton Towers (although I’m not keen on rollercoasters either).

So yeah, when I was asked, a number of memories started flooding back. Memories of things I’d managed to put into a mental compartment entitled “won’t be doing that again.” I initially told myself I’d say no. But as most people know, I have major issue with turning down a challenge, it’s like a disease. I can’t help myself. It’s like that scene in Back To The Future where Biff is calling Marty a chicken. I start to run it over in my head, “You can do it,” I tell myself, “You’re not a wimp.” And then before I know it I’m doing another event I’m dreading for the next few months. Story of my life.

So, with a couple of months to go, I was headed to Tough Mudder again, only this time I knew what to expect. I knew the various obstacles weren’t just marketing crap designed to make people scared. The ice cold water really is ice, the jumping from a high platform really is high, the electric shocks really are connected to a generator. And the worst thing about knowing what the things are really like is the fact it plays on your mind. You recall the very point where you were stood at the top of a deep dark pool of water 15 foot below, every inch of you saying it’s a bad idea. Every muscle telling you to climb down and go for a latte somewhere nice and warm.

Training wise I was fine (you can read how I used the Sony Xperia and SmartWatch 3 as training aids here). I was running half marathons frequently and going to the gym quite a bit. But Tough Mudder isn’t just about fitness, yeah it helps, but training for four hours a day doesn’t make you less scared of electric wires. There’s not a great deal you can do to prepare for that, well nothing you can do safely do in your own home – apart from play that stupid game from the Gadget Shop everyone got for Christmas.

Fast-forward two months and I’m stood at the start line of the Tough Mudder Scotland event. When I’d done it two years ago it was in south West London in the summer. It was 28 degrees. The ice pool almost looked inviting. In Scotland it was 9 degrees, windy and raining. I also heard someone explain how the electric shocks are worse when it’s wet. Damn you impulsive Marty Mcfly brain.

After a ten minutes of Tough Mudder spiel about pledges and some inevitable male bravado about solidarity, we were off. When you run a normal race you can start with a sense of dread, but as soon as you’re off its sort of disappears. All you can do is keep going. But in Tough Mudder it doesn’t go away, it gets worse as you near the obstacles

Some people are scared of heights, some of enclosed spaces. I’m not fond of either of them to be honest. The electric shocks are just a step too far. This year there were a number of new obstacles. Instead of a large drop into a pool of water you now have to grab hold of a metal swing which propels you higher into the air before you fall down. Instead of jumping into a skip of ice water you now had to climb a slide and launch yourself in. I’m also fairly certain there were a less electrical wires last time as well.

I got through the first half of the course fine. A bit of climbing over walls, I’m pretty good at that. Clambering through a tunnel in which they pumped in some sort of menthol tear gas. Actually helped sort out my cold. I even didn’t mind pulling myself into a tunnel and landing in a large bog. Not much anyway. Monkey bars – love ’em.

But halfway through we got to the Arctic Enema 2.0. As mentioned before, a slide that launches you into a skip full of murky ice water. Not the nicest thing to. Still, I did it. Wasn’t too bad in fact. This might not be so painful after all.

But later came the real thing I was dreading. The King of the Swingers. I stopped bit before it and walked, watching the people go up before me. I really didn’t want to do it. It was a lot higher close up. As I slowly crept onwards a steward beckoned me. “Are you coming?” he bellowed, like some orange tabarded harbinger of death. “Big time,” I replied. Damn you brain. Damn you to hell.

Unlike the Arctic enema 2.0 the King of the Swingers was just as bad as I’d imagined. Worse in fact. The aim is to swing up and hit a bell hanging above you. I barely even held on until the end of the swing before letting go and landing on my back in the water. There was pain. Lots of pain. I chambered out making “oooh” sounds as I made my  way back onto the course. Now I just had electricity to worry about.

Now, when you come up to an obstacle and see a group of two large muscular men fall to the ground because they’ve been hit by an electric current, is doesn’t fill you with excitement. I watched as they quickly got up and crossed the finish line. In front of me stood five women. A crowd of hundreds waved and cheered from the sides. They looked pretty scared. “Come on people,” I said under my breath. I just wanted to finish. Eventually they went, a queue forming behind them. They ducked and weaved through the wires and made it out to the end. Not so bad, I thought to myself.

“Next!” shouted the swarthy mic controller. I looked behind me to see a bunch of people wearing some sort of team colours. “We’re going together. You go,” a man said to me. I was on my own. 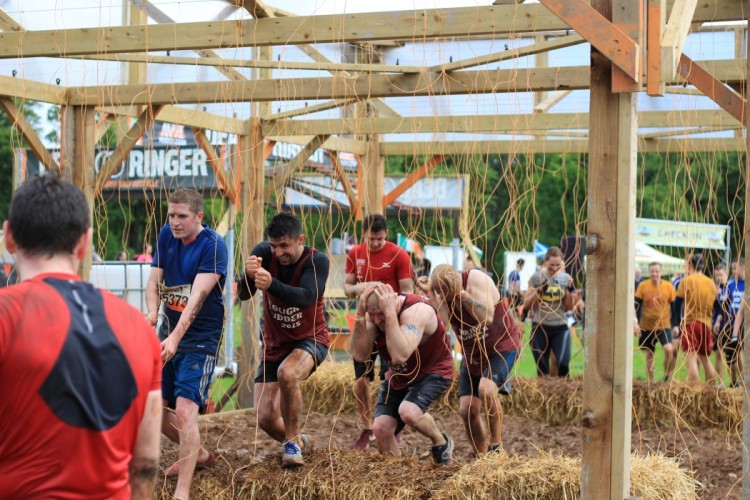 I lurched forward, squinting – someone told me they’d been hit in the eye with a shock. I was halfway and I’d felt nothing. Ha, I thought. I was worried about nothing, probably wasn’t even turned on. Then suddenly a wire hit me in the shoulder. Man they smart. It felt like being hit. I leapt forward, I didn’t care about being hit again, I just wanted to get out. There’s was one more shock on my head and I was out. It was over.

I stepped over the finish line as someone placed a headband on me. A sense of relief running through me.

There were a mix of emotions at the end from the finishers; relief, joy, pride. One man even said he wanted to go again. Weirdo.

But for all my grumbling and whining I was pleased I’d done it. There’s always a sense of pride doing something you really don’t want to do. In a running race it’s overcoming the physical pain, in Tough Mudder it’s about facing your fears. Fine, I still have those fears, probably worse now thanks those damn swinging bars, but it’s good to know you can make yourself do it. To know that you aren’t limited by worries.

Not doing it again though. Definitely not.

For more information on the Sony Xperia and Smartwatch range click here.