Alright, alright, we’ll hold our hands up hands up. We’re pretty bad at healthy eating. Fine, We’re not awful by any stretch of the imagination. We don’t go to McDonald’s unless it’s been a particularly heavy night out, we don’t eat sweets very often and we always try to drink a lot of water. But, in reality, we’re a hell of a long way from having a well-planned, balanced diet.

We can’t even make an excuse for it, aside from the fact we’re a bit lazy and can’t be bothered to prepare food all the time. We’re just used to planning meals about half an hour before we eat them – normally at the Tesco Metro on the way home from work. Planning is a bit of a stretch actually, more like we scan the nearest food aisle and pick up something semi-healthy as long as there isn’t someone in the way.

We know, deep down, how important diet is. We know that without a balanced intake of nutrients, any training we do at the gym is largely wasted. We’ve known this for a long time. And sometimes we have actually spent evenings preparing food. But sooner or later we generally fall back to habit and fill our shopping baskets with food we know probably won’t do the job.

So, we decided to enlist some help in the form of London-based food preparation company Fresh Fitness Food. If you haven’t already heard of them, the company was set up in 2012 by a chap called Jared Williams as a result of “passion and frustration”. Originally ran by Jared from the kitchen of his flat (doing the food preparation, marketing and sales), the company now produces thousands of meals to people across London. People who take their diet a bit more seriously than we normally do it would seem.

The concept is relatively simple. You fill out a form explaining to the crew at Fresh Fitness Food what your goals are. The five main categories are Sculpt and Tone, Lifestyle, Fat Loss, Competition Preparation and Muscle and Performance – although you can actually explain to them if you have any specific requirements that fall outside the norm.

Once you’ve signed up and sent across your diet requirements along with when you want it to start, the team will get ready to send out your personalised meals. So yeah, pretty simple.

We’d never done any sort of strict diet before, save for a few attempts at the 5:2 diet and a couple of months on low carbs. So having someone actually create a strict plan for us was quite new.

We opted for the muscle and performance package. Designed by a Michelin star trained consultant, this option focusses on food that will supply the body with the correct nutrition to fuel an exercise routine, ensure fast forward recovery and support both lean muscle growth and athletic performance. Basically the food you need if you go to the gym a lot.

When woke woke up on the Monday morning there was an email in our inbox. Which was good as we’d completely forgotten it was happening. It read as follows:

Our first reaction was how many days is this for? Having never attempted a diet designed to feed an athlete we’d never contemplated eating so many meals. We checked the website. Yep, this was one day worth of food. Maybe they were just small portions.

Upon arriving at work we picked up the chill bag from reception – a pretty big chill bag in fact – and started to rifle through the contents. Nope, they were definitely not small servings. These were proper meals. Five of them and a drink, and a desert. With only 2,500 calories covering the whole lot it just goes to show how much food you can eat if you eat clean instead of just buying rubbish. The equivalent would be one large pepperoni pizza from Papa Johns. 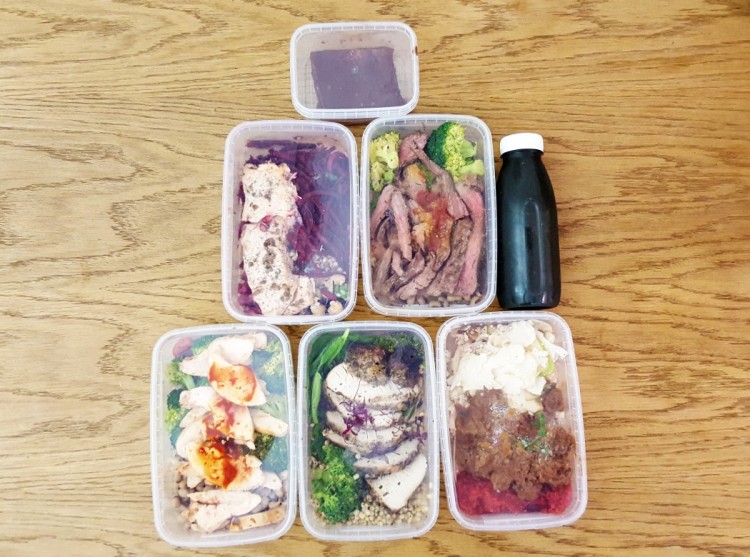 The meals are all prepared and cooked. So all you have to do is put them in the microwave for as long as you want and eat them. It’s as simple as that. You just have to read the number of the front that tells you which of your meals it actually is (although we have to mix some around as there was a slight issue with eating fish-based meals in the office). There’s also a handy little note on each plastic container letting you know that any requests you made have been adhered to. In our case no raw tomatoes or cucumber.

Day one was actually pretty tough. We ate our first meal at 9am, our second at 11.30am, our third at 3pm, another at 6pm then finished off the rest at home around 9pm. It was a hell of a lot of food. We’ve always worked under the principle that being able to eat as much food as you want would be a treat, we’re always pretty careful. But when you’re actually given this much food and you’re not used to it, it’s a real test. Something we never even through about when we’ve seen our weightlifter friends shovelling their way through a pile of containers.

So, ignoring the quantity, what about the food itself? Well firstly, we’ve never eaten such a varied range of foods in a single day. Seriously, look at all of those ingredients. Normally we’d probably have one type of meat a day, maybe two at a push. Not five. It was like carnivore heaven. But, on the other side we’ve also never eaten so many vegetables, again, there are absolutely loads. For someone who should probably eat quite a lot more vegetables it’s a real eye-opener. It also means we ended up eating things we don’t normally and realising that we actually quite like them (celeriac – who’d have thought?).

By the third day we’d acclimatised to the strict eating sessions and the amount of food. Even finding ourselves becoming hungry in-between meals. The ingredients were still kept relatively varied up until day five where we smiled with glee at the sight of an all day breakfast as we turned up to work (healthy version).

So as far as the service goes, we were pretty impressed by the end of the first week. Fine, we enjoyed some meals more than others, but the company want you to feed back on the meals being sent. If you don’t like something just let them know and they’ll modify it for you. In terms of quality the ingredients were all extremely good, and noticeably so against things like microwave meals or fast food style restaurants. The service was also excellent – our full day worth of food was sat waiting for us as we got into work at 9am every day.

So the real question then. How much does all this cost? Well, as you can probably imagine it isn’t cheap. You’re basically having every meal you eat cooked by a chef and sent you on a daily basis. The pricing structure varies between £20 to £38 a day, depending on the option you go for (details here). Essentially it all boils down to how important diet is to you, how busy you are, and yes, how much you can afford. It’s not for everyone, obviously, but the ease and quality of the service is a definite option for a certain type of person with certain types of need.

For more information on Fresh Fitness Food nip over to the website and see what they have to offer.