We had a day off on Friday. Aside from a lie-in, some nice breakfast and maybe a trip to the cinema we weren’t really planning on doing a great deal. That was until the guys over at Reebok invited us to their event to launch the Gym Is Everywhere campaign. This is the second time it’s happened in the last few months – they seem to have a habit of organising gruelling fitness challenges around days where we don’t really want to do anything. It’s like they don’t want us to relax or something.

We could have said no, sure, but you know how we are with a challenge. So, at 7.30am, as the alarm rang on our phone, we got changed and headed over to Boxpark in Shoreditch. We may have been grumbling quietly to ourselves most of the way.

If you haven’t already heard of the Gym Is Everywhere campaign, let us enlighten you. To be honest the title is fairly self-explanatory, so you’ve probably guessed the gist of it already. The idea of training outside of the gym is becoming pretty popular these days. Instead of spending your hard-earned money on an expensive gym membership you can use things around you to replicate the same exercises. It’s not rocket science, but finding the right exercises to do can be a bit tricky if you don’t know what you’re doing. Exercises done outside the gym are typically more functional than using machines as well – which means you’re preparing your body for real life situations and not working on the T-shirt muscles. 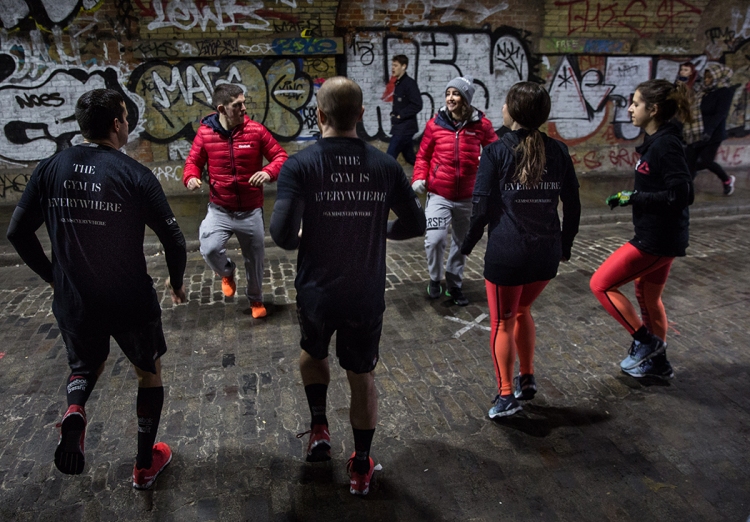 To launch the campaign Reebok hosted a two-day pop-up event over at Boxpark where members of the public could sign up for a free outdoor training session with the Team Reebok UK athletes. Which is pretty nice of them.

The event area was kitted out like something from Rocky 4, with various sized tyres dotted around the space, piles of logs, hefty sandbags and various other outdoor-type equipment. It looked pretty fun in fact, that is until we actually started the workout.

The session started with a short functional warm-up before we moved on to the main section; a twenty-minute AMRAP (as many reps as possible). Now, we should probably point out here that we’re not a big fan of AMRAPs, mainly because we have very little stamina when it comes to anything other than running. Twenty minutes is a long time to consistently do weights-based exercise, especially if you’re not used to it. It’s a damn good workout though, as you can probably guess from some of these photos.

We worked in pairs to complete a set series of workouts. First we headed to the large tyres where we did 40 burpees, hopping in and out of the tyre between each one. Next we picked up a sand bag and tyre and ran down the street before doing 100 squats, 100 overhead lunges and 100 clean and presses, all using the sandbag (which was actually pretty heavy, and really hard to hold). Whilst one of us did the exercises, the other person held the tyre above their head, swapping the exercises between each other until we managed to complete to full amount.

If we were doing the workout on our own we may have been a bit lazy with the reps. Unfortunately, when you’ve got Reebok athlete Jordan Wallace stood next to you, taking a little break isn’t really an option. By the time we were on our second round of burpees things were getting pretty painful. Actually by about two minutes in things were getting painful. 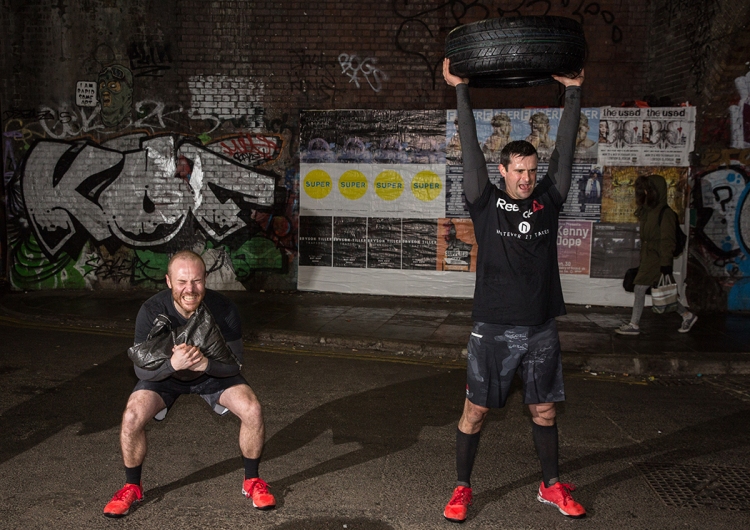 So after twenty minutes, and nothing more than a couple of tyres, a bag of sand and a busy London street (pedestrians were confused), we were pretty much spent. Not bad for a free workout.

The free training sessions were open to the public throughout Friday 22nd January and Saturday 23rd January, led by guest coaches from local Reebok CrossFit boxes and Gymbox Personal Trainer Ashleigh Lawrence. There were also prizes from the Reebok range as well as vouchers to use at the Whatever It Takes store down the road for people taking part in tyre flipping and burpee challenges.

You can see more pictures from the event by searching the hashtag #GymIsEverywhere.