If, like us, you’ve recently signed up to the Red Bull Quicksand event over in Margate, you may be slightly concerned about what it’ll be like running a race on sand. And you’d be right to be a bit worried, because apparently running on sand is up to 1.6 times harder than running on road – suddenly that one mile wave doesn’t sound quite so short.

Training on sand is a technique used by a number of world-class athletes because of that very reason. Not only is it harder to plant your feet, it’s also way tougher to lift them back up afterwards. The reason is pretty simple, stability. If you can’t gain a stable footing, you’re putting in a hell of a lot more work.

Don’t you worry yourself though. We got some advice from two-time Olympian Andy Baddeley on how to make running on sand a bit easier.

Running on the sand, you are going to expend on average 1.6 times more energy than you would running on the road. With this in mind, you need to prepare your core so that your body is not in total shock when you start your run.

Building up your core can be easily done with this series of exercises ahead of racing along the beach.

Single leg bodyweight squats – focus on keeping your knee central over toes; this promotes balance, core, glute and quad strength. For the more advanced, try this on a bosu ball.

Classic Plank variations – adopt the standard front plank position on your elbows, trying to keep a neutral spine. Initially, just practice holding it for a minute then build up to longer times coupled with lifting alternate feet, or moving up onto hands (into press up position) and back down onto elbows again.

Leg lowers – Either on the floor, or lying on your back on a bench in the gym, focus on maintaining your spine position as you lower your legs from 90 degrees down to the floor and back up again. Easier option with knees bent, and one leg at a time. Hold on to the bench next to your head to help. 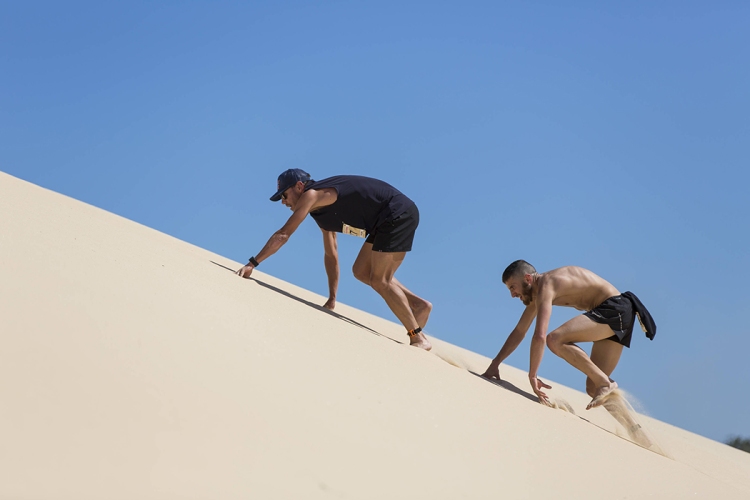 Running on sand will be a shock to your body (and specifically lower legs) regardless. To soften the blow on race day, make sure you give yourself ample time to get used to the terrain.

Herb Elliott, winner of the 1,500m at the 1960 Rome Olympics, regularly incorporated sand dune running into his training and eventually broke the then world record to run 3:54.5. He held the record uphill time (11 seconds) for running up an 80-foot sand dune.

To avoid your legs burning, your lungs bursting and your heart rate going through the roof inside the first minute, practice running on the sand before race day.

Don’t even attempt breaking any personal bests when you’re running on the beach. Running on sand can be like running with ankle weights on, it will be tough at the best of times. Make sure you set off at a sensible pace, race the course and the terrain, not the distance as you know it.

Give yourself a chance to really push yourself in the closing stages rather than having to slow down in the middle section of the race.

Whilst sand is an unpredictable surface to run on, you can be smart when choosing your perfect route to a mile. After running on the sand for a short while you will learn how you and your feet react to the surface. Choose the firmer, faster sand for your quickest route to the finish, avoiding any sandcastles or beach holes along the way.

The extra pain in the legs isn’t necessarily a bad thing and can eventually result in faster times when you are back running on the road.

Sand running can be a form of speed training and you’ll feel the benefit when you next attempt to better your parkrun PB.

We all love our running gadgets. Whether it is the swanky new GPS watch, a heart rate monitor that gives you a new number every tenth of a second or magic headphones that make you forget you’re hurting.

When you are destined to run a race with ups and downs on a tough surface, don’t let the technology be a distraction. Push yourself without needing to know the pace you’re running, the readings will prove inaccurate compared to your road running.

Enjoy the time without the numbers, switch off and enjoy the views.

Red Bull Quicksand takes place on September 1 in Margate, Kent. Entries cost £30, although you can use the code THEALLROUNDER15 to get a 15% discount. to sign up and get more information head to redbull.co.uk/quicksand