I didn’t get a chance to take part in the adidas City Run Shoreditch 10k last year – think I must have been on holiday or something – so I was pretty pleased to get an invite to join team Fitbit at the 2018 event. I’d only managed to take part in the City Run One Hour event from the series so far so I still had three more to tick off, and you know how I get FOMO when I don’t get to take part in London races.

First, a notable shout out to the Fitbit crew who not only invited an awesome group of us down to join the team, but also put a pretty damn impressive track session on a few weeks before to help us with the training. It was the first time I’d done any track training for well over a year and I’d forgotten how much I enjoyed them. The session took place down at Paddington Rec with trainer Omar taking us on a few drills to build up speed. Based on the fact that ManVMiles and Mike Sawh were there as well, it got pretty heated. Here’s the team in all their glory.

Anyway, back to the race

To be honest I wasn’t sure what to expect from the Shoreditch event. I hadn’t really heard a great deal from the 2017 race and the route on paper didn’t look particularly exciting. Still, I love trying out a new race so I was pretty keen to head over, especially considering it was only a 20-minute bus journey from my house (the best races are always the closest).

I’d already raced on the Saturday and the weather was pretty much perfect. When I woke up on the Sunday it was pelting it down with rain and it was fairly damn cold. The event village in Shoreditch Park was basically just people huddling under trees and awnings waiting for the race to start. It was relentless. Definitely not the kind of day where you expect to run well. My aim was just to see what the course was like and try to get indoors as quickly as possible. The Fitbit team was also massive, so I spent most of the pre-race just meeting interesting fitness types.

By the time our wave came around everyone was pretty much shivering and desperate to start (always a hell of a lot of waiting around at bigger races). We were beckoned to the front of the start line where The Three Dumbells (popular and very nice bunch of personal trainer podcasters) did a bit of a warm-up. I didn’t pay any attention to that though as I was too busy working some mind games on ManVMiles – I’m never going to beat him on running ability alone.

As the minutes counted down it suddenly stopped raining, in an instant the race suddenly got interesting as the mood lifted across the lined-up runners. I looked to the end and saw James Carnegie squatting with his camera at the end of the road. I glanced at ManVMiles, waited for the countdown to finish then sprinted off.

Alright, I may have only been there for about a 30 seconds, but for a very short period I was at the front of the wave, before ManVMiles overtook me and headed off into the distance. Felt nice while it lasted though.

So, how was the race?

Alright, I should probably tell you now that this was a pretty big moment in terms of running for me. I don’t know how I did it, I certainly didn’t set out to, but for the first time in about 400 races (not sure how many of those were 10ks) I hit a sub-40. 39.49 to be precise. So I may be slightly biassed in terms of my memories of the event. Even so, I’ll try to recall it objectively.

Based on the fact we were at the front of the wave and that it had been heavily raining all morning, so the crowds were pretty thin, the course seemed relatively empty and quiet save for a couple of main locations. I’m a massive fan of routes that twist and turn around streets as it distracts from distance, unlike races with long straights, so I actually loved the route. It reminded me of Ealing Half Marathon.

It wasn’t until we hit the end of the first wave runners that it started to get busy. The roads are pretty wide around the majority of the course though, so it didn’t cause many bottlenecks.

The only bit you need to watch out on are the cobbles around Hoxton Square, especially in the rain.

Did I enjoy it?

Yeah I was ecstatic. I’ve been chasing a sub-40 for about 8 years and the idea of actually getting one seemed pretty unlikely. I’m not sure whether it was the course, the motivation of running from the front, or the fact I desperately wanted to get within about a minute of ManVMiles (I didn’t), but I definitely pushed myself harder than normal. When I crossed the finish line I remember thinking “I GOT A SUB-40! But I don’t feel like I pushed myself that hard”. Then we received the photos and I realised that I probably was trying quite hard. Must have been the adrenaline numbing the  mental pain. 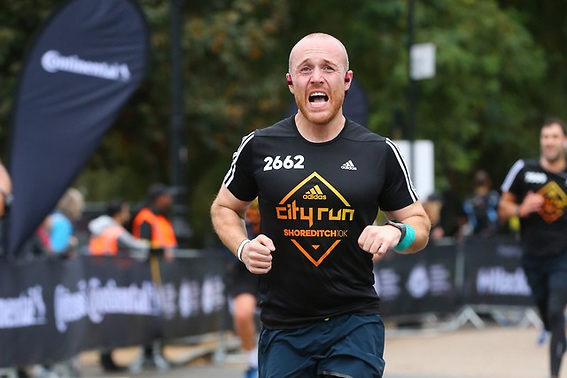 How much was it?

What did you get?

Is it worth doing?

I’ve only done the One Hour event and this one, and to be fair I really enjoyed both of them. As 10k races in London go, you do get a lot of stuff for your money (the T-shirt is really nice) and the location makes it relatively easy for people to get to from across the city. In terms of places to finish after a race, you’d be hard pressed for somewhere better placed for breakfast/booze/coffee. Just a bit annoying that it was probably the worst weather we’d had for the best part of four months.

To find out more about the adidas City Runs series, head over to the website here.

Oh, here’s a happy picture of me after getting my fastest time ever (not sure if I’ve mentioned that yet).